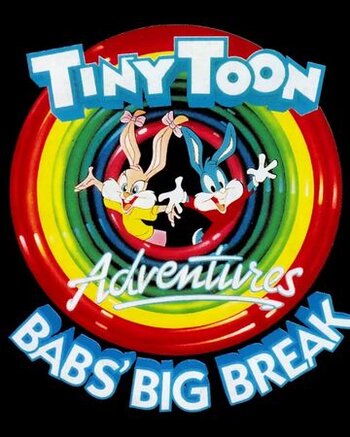 A Tiny Toon Adventures Licensed Game for the Nintendo Game Boy, released in 1992 by Konami.
Advertisement:

Babs Bunny wants to become a famous star. She wants to practice at the Acme Theater, but Montana Max wants to buy the theater so he can tear it down and build a factory. Buster, Plucky, and Hamton have to help Babs fulfill her destiny and defeat Montana Max.

The game is a platformer with four levels, where the player can play as Buster, Plucky, or Hamton, each with their own projectiles. In each level, the character will come across a special helper who can assist with getting through a tight spot. Gems can be collected and spent playing mini-games for more power-ups or extra lives.