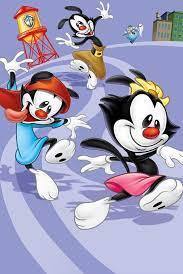 And we're zany to the max!
"This is what entertainment is all about... idiots, explosives and falling anvils."
— Calvin, Calvin and Hobbes
Advertisement:

One of the most widespread of animated cartoon genres and one of the most representative of animation in other media. The zany humor of these cartoons date back to the peak of The Golden Age of Animation, but actually came to dominance slightly afterward. After the big focus on musical aspects had passed, this style of humor, which focused on wild, wacky physical reactions and behaviors from hammy cartoon characters, came to the fore. This genre is filled with cartoon physics and highly unnatural situations. It's where the tropes of walking off the cliff but not falling until you look down or painting a hole in a wall and then having it become a real hole came from.

Several of the first examples came from Looney Tunes and Tex Avery creations. The characters are as important to the genre as the visuals here, as the action was surreal and subverted natural laws, and the characters were subversive and explosive themselves. Daffy Duck is a mad overreaction that would just be physically impossible, and Bugs Bunny's iconic line "What's up, doc?" was a coolness in the face of danger that subverted expectations of the time.

Examples include but are not limited to the following:

Tropes associated with this genre