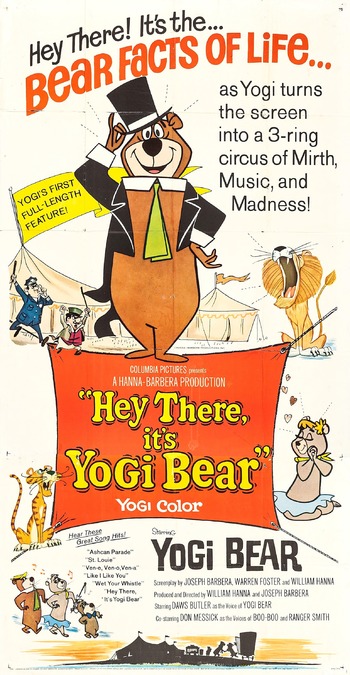 Hey There, It's Yogi Bear! is The Movie about the titular pic-a-nic basket stealing smarter than the average bear. Released in 1964, it was Hanna-Barbera's first full-length feature.

Spring has come to Jellystone Park once more, and with it comes the return of Yogi Bear from hibernation, who proceeds to get up to his normal antics. After one too many thwarted efforts from Ranger Smith, Yogi decides to give an ultimatum to his adversary: either revoke the "Do Not Feed The Bears" rule, or he leaves. Much to Yogi's shock, the ranger calls his bluff and decides to send Yogi to the San Diego Zoo!

Yogi's able to elude this fate, but unknowingly sets events in motion that leads Cindy Bear—who is in love with Yogi—to being sent away from Jellystone and into misery and peril. Upon discovering this, Yogi and Boo Boo set out to rescue Cindy and bring her back home to Jellystone. Will they succeed, or find themselves in even greater danger?

Hey There, It's Yogi's Tropes!