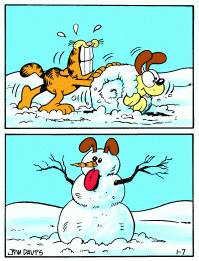 Not necessarily a human snowman.
While snowman-making is one of the most fun activities of winter, it can also happen if an unfortunate person gets caught up in the snowball used for making the snowman. This will often be Played for Laughs if the first character intentionally gets the other character stuck in the snowman as a cruel joke.
Advertisement:

Expect this to show up in Comedy.

Can overlap with: Human Snowball.