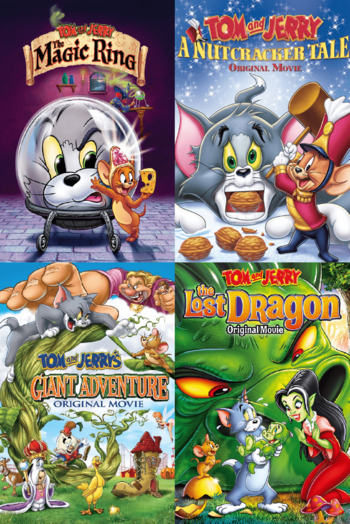 As a franchise, Tom and Jerry had been famous for several decades, winning over audiences with their iconic slapstick and eternal rivalry. Eventually, Warner Bros Animation decided to put these characters to use in a Direct to Video series with the release of 2001's Tom and Jerry: The Magic Ring, similar to how they adapted Scooby-Doo in the Scooby-Doo Direct-to-Video Film Series. From that point onwards, Warner Bros has made a point of releasing a new movie every 1-2 years.

Many of the movies feature the titular cat and mouse getting into themed adventures that test their rivalry or, in some cases, force them to work together. Cameos from other MGM characters are often rather common, and sometimes other Hanna-Barbera characters show up as well. In more recent years, many of these features cross the titular duo over with other properties.

Cartoon Network is definitely owed some gratitude for airing a lot of these films not too long after arrival with Tom and Jerry and the Wizard of Oz and Tom and Jerry: Robin Hood and His Merry Mouse airing before their home video releases.note  They've strayed a lot from this over the years, some not airing on Cartoon Network at all and not airing on Boomerang until over a year or two after their release.

To date, there have been 14 entries in this series.

Tropes Across the Series: