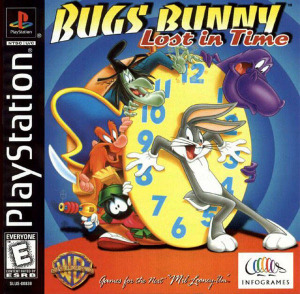 "Collecting symbols... well, why not? After all, they laughed at the man when he discovered the penicillin."
—Bugs Bunny ruminating on his Collect-a-thon objective.
Advertisement:

Bugs Bunny: Lost in Time is a Looney Tunes video game for PC and PlayStation. It was published by Infogrames and was the company's first title using the license, which would continue on with a whole range of other well-made games. Its developer was Behaviour Interactive, using a modified version of their engine previously used in Jersey Devil.

Bugs Bunny, once again taking a wrong turn at Albuquerque - this is becoming a running habit, Bugs - stumbles into a warehouse where he mistakes a Time Machine for a carrot juice dispenser. He accidentally activates it, putting him in a time era known as Nowhere. There, he meets a sorcerer named Merlin where he is guided to collect clock symbols and golden carrots to go back to the present.

It received a 2000 follow-up in the form of Bugs Bunny & Taz: Time Busters.