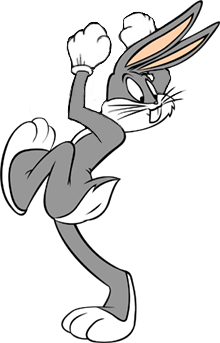 Any character who is about to dash off on a high-speed run inevitably takes — just for a moment — a pose that looks like they're winding up for a pitch in a baseball game: one leg raised, the other bent slightly, the body twisted at the waist away from the direction of travel, with arms raised and bent at the elbows and often canted at an angle. Although their entire upper body is turned away from the direction they'll be running in, their head is always facing that way.

This posture is held for a moment, just long enough to be seen, and then the character is off and running, accompanied by a sound not unlike that of a ricocheting bullet. The "Charge" Fanfare would be a Standard Snippet.

Note that, depending on the level of "cartooniness," this can even be extended to vehicles, which will bend into an S-shape to mimic this behavior before taking off.

Compare Running on the Spot, Wheel o' Feet and Speed Echoes. Whoosh in Front of the Camera usually occurs after this.