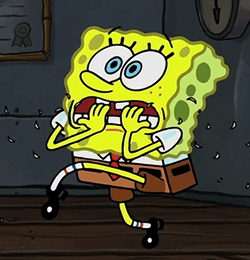 A character, nervous at the sight of something, will begin to bite their nails really fast in order to try to calm themselves. In Western Animation, this will more often than not result in a flurry of nail clippings due to the sheer rapidness of the nail-biting, often with a typewriter sound effect.

This comedy trope is often used by a Cowardly Lion, Lovable Coward, or a Nervous Wreck.