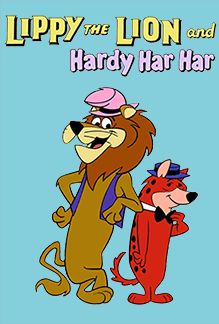 Lippy the Lion and Hardy Har Har are a pair of Hanna-Barbera Funny Animal cartoon characters, respectively a lion in a tattered top hat and vest and a hyena in a porkpie hat and bow tie. Both characters are inversions of their species' traditional stereotypes: Lippy is a happy-go-lucky schemer, while Hardy's very name is ironic, as it's an onomatopoeia for laughter and Hardy is an eternal worrier and pessimist, to the point of having a major depressive disorder; indeed, one short implies that any expression of joy or happiness causes him physical pain.

Daws Butler voiced Lippy in a manner reminiscent of Joe E. Brown, and would use the exact same voice later for Peter Potamus. Hardy's vocal actor was Mel Blanc, done similarly to the way he portrayed the postman on The Burns and Allen Show. They appeared as the third segment on The Wally Gator Show.

The pair would turn up sometimes in later Hanna-Barbera shows such as Yogi's Ark Lark, Yo Yogi!, Yogi's Treasure Hunt, and Yogi's Gang. A heavily-altered version of them appears in Jellystone!

Tropes? Oh me, oh my, this will never do: