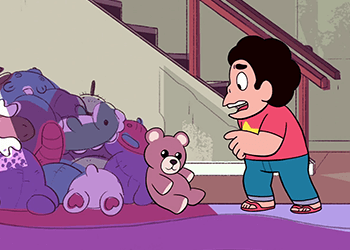 Guess which toy Steven picks up.Give up? None of them.
Dean: Whoa, hold on. Check out that book.
Fred: There are a lot of books in here, Dean.
Dean: No, that one. The one that isn't painted into the background of the car —[coughs] — library.
— Supernatural, "ScoobyNatural"
Advertisement:

In some cartoons, it is obvious that a part of the background will be used. What makes it obvious is that it is strikingly lighter in color than its surroundings. It might also have an obvious difference in detail or color saturation. Another telltale sign would be clear black outlines on the object: the three clearly outlined rocks on the cliff would be the ones to tumble.

A similar situation is where things that should move don't, because they are made a part of the background to save time.

This is an unintentional artifact from the traditional, celluloid animation process. This was largely because, besides being painted by different artists at different times/locations, already making consistent matching difficult, each foreground/animated object would require up to hundreds of different drawings, as opposed to backgrounds/matte paintings, which each only needed to be done once. Therefore devoting any more than basic color saturation and contrasting light values would only make the process even more lengthy and time consuming than it already was. Additionally, the unpainted portions of cels were not perfectly transparent, so the colors on lower cels became more and more muted as additional layers were added to the top of the stack.

Film critic Roger Ebert has called this the "Fudd Flag", after Bugs Bunny's nemesis, who uses it to determine which tree Bugs is hiding behind, which rock he needs to trip over, etc.

Nowadays, digital ink-and-paint and compositing has largely displaced the use of painted cels, meaning that colors can be matched accurately (although conspicuously light patches are still pretty common in cartoons with digitally inked-and-painted foregrounds and hand-painted backgrounds). The issue of lavish backgrounds contrasting with simple animated elements remains to some extent, but it is often avoided. Many TV cartoons now use backgrounds rendered in the same simplistic style as the animation, while theatrical films can now use CG to render "background" elements that can be animated... which can lead to a whole new set of problems.

Something similar occasionally appears in older live-action productions. In particular, you may see an oddly colored sheen around the characters in shows featuring heavy use of Chroma Key. In his review of the Star Wars prequel trailer

, Mr. Cranky dubbed this slight Special Effect Failure a "mystical aura." The technique has since evolved to the point where it is mostly no longer noticeable. Mostly.

No form of animation being intrinsically immune to the Fudd Flag, claymation-animated works are wholly capable of falling prey to it, too.

This also applies to mid-era point-n-click Adventure Games, when the background would be painted or 3D rendered, while objects would usually be drawn sprites. However, this had a practical use, allowing players to easily locate collectible objects, even small ones. Especially small ones. A similar version can appear in action games that require you to destroy parts of the environment to proceed, again, mostly in older ones. The breakable parts would usually be a different color, and one can sometimes even see the seams where the object is supposed to break apart.

In early console games, some interactive objects might use a noticeably different palette than the background, since sprites and backgrounds have their own color spaces.

Also, it may be used intentionally in video games to help point out certain objects or items, and often in different form than the accidental style mentioned above but the same spirit (something that looks out of place in a minor way that reveals it to be important) most often as a Notice This.

Occasionally inverted by allowing the cel/object to exist and making it readily visually apparent, and then moving the background art instead of the cel.

This trope is particularly prominent in cartoons made during The Golden Age of Animation. With the modern trend of flash animation, there is almost no difference between backgrounds and cels, completely averting this trope altogether by the fortune of new technology.

The visual variant of Five-Second Foreshadowing.

The visual variant of Five-Second Foreshadowing.