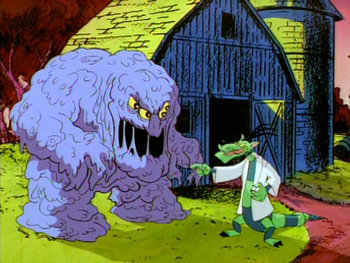 "I have big plansss for you! With your help, I will have Katalyssst 99 and the power to dessstroy Megakat City!"

An evil pilot named Morbulus (Jim Cummings) flying a purple jet blows up an oil refinery. Hot in pursuit are the SWAT Kats. Their enemy has been blowing up refineries all day. Razor targets the other jet with an Octopus Missile, but Morbulus dodges, allowing the missile to instead hit the upper floor of a building. It turns out this is because Morbulus literally has a second pair of eyes in the back of his head, allowing him to see behind as well as in front of himself. As he prepares to bomb another refinery, T-Bone flies the Turbokat into a cloud bank. Using it as cover, he maneuvers underneath Morbulus' jet where even he can't see them. A Cookie-Cutter Missile fired by Razor cuts the villain out of his cockpit, and he is saved from falling to his death by the Turbokat's "Sky Claw," after which the SWAT Kats drop him in the ocean and fly away.

When Callie Briggs and Commander Feral arrive, they fish what they think is Morbulus' drowned body out of the ocean, but it turns out to just be his empty clothes put back together to make it look like he's still in them. He's escaped. Mayor Manx arrives with a group of reporters, including Ann Gora (Candi Milo) from Kat's Eye News. As they interview Feral, Morbulus, in his underwear, comes ashore further down the beach and enters a drain pipe where he encounters half kat, half snake evil biochemist Dr. Viper (Frank Welker).

The SWAT Kats return to their secret hangar underneath the Megakat City Salvage Yard, changing back into their civilian identities as mechanics Chance Furlong and Jake Clawson. They're shocked when they turn on the news to discover that Morbulus has escaped. When Commander Feral angrily blames them, Chance throws a can of milk at the screen, breaking the TV. Callie shows up to get her car's engine looked at. She turns down Chance's offer to drive her home in the tow truck, explaining that Mayor Manx's chauffeur is waiting outside in the limo, and departs despite Chance's attempts to flirt with her.

Meanwhile, in an area of the swamp known as the Dead Forest, Dr. Viper has taken Morbulus back to his secret lair, where he explains he needs a biochemical compound called Katalyst 99. Morbulus initially agrees to help him get it, but balks when told it's in the "impenetrable" Megakat Biochemical Labs. Undeterred, Viper puts a drop of purple liquid onto Morbulus' arm, causing him to painfully mutate into the scientist's newest creation, a giant bacteria monster. Viper promises to use him to steal Katalyst 99 and destroy Megakat City.

The following day, Chance installs "turbo plugs" in Callie's engine to give the car extra horsepower, over Jake's objections. When he revs the engine, the extra power causes it to blow up. Now they need a new engine and a new TV. Their ne'er-do-well co-workers Burke (Mark Hamill) and Murray (Charlie Adler) show up to dump off a load of scrap. In the scrap they brought, Chance and Jake find a TV and an automobile engine they can use.

Meanwhile, Dr. Viper and his slimy purple bacteria monster stop off at a farm. Because Morbulus had eyes in the back of his head, the creature he's become has four eyes. After the monster eats a cow, the farmer (Mark Hamill) tries to fend it off with his pitchfork, but Viper grabs him with his prehensile tail and feeds him to the creature before he leads his creation into the city, where it attacks the opening of the new Manx Municipal Park, endangering Callie and Manx.

Trying to escape in Manx's limo, Callie drives into and through the monster, causing it to divide like an amoeba into two monsters. Since Kat's Eye News was covering the park opening, Chance and Jake witness the attack on their new TV while installing the new engine in Callie's car. Becoming T-Bone and Razor again, they fly off in the Turbokat, although it's actually Commander Feral who rescues Callie and the Mayor in his helicopter as the monsters eat the limousine.

Not listening to Callie or the SWAT Kats, Feral orders his pilot to fire on one of the monsters, but all this does is make it divide again, creating three creatures. The trio head towards Megakat Labs as Callie, Manx and Feral race ahead in the chopper to beat them there. One of the bacteria monsters deviates from Viper's plan and wanders into a subway tunnel. Razor follows it on the Cyclotron, but is too late to stop it from eating an entire subway train full of innocent people.

Razor discovers how to kill the bacteria monsters when the creature, attempting to pursue him, steps on the subway's third rail and is electrocuted, melting into lifeless brown glop. Meanwhile, at Megakat Labs, Callie, Manx, Feral and the Enforcer pilot seek the help of biochemist Dr. N. Zyme (Paul Eiding), who identifies the monsters as giant bacteria and proposes to use a high dose of antibiotics to kill them. He then assures a worried Callie that the lab's windows are made of unbreakable armored glass. Outside, the remaining bacteria monsters arrive and smash the building's defenses, allowing Dr. Viper to just walk inside.

On the roof, Dr. Zyme loads a missile containing antibiotics onto Feral's chopper. Manx comes with Feral, refusing to stay behind in case Zyme's plan fails. The SWAT Kats arrive and kill one of the remaining monsters using a Megavolt Missile, which electrocutes it. Observing this from his chopper, Feral fires Zyme's antibiotic missile at the final monster, but it fails. Appearing inside the main lab, Viper taunts Callie and Dr. Zyme, explaining that he made his bacteria monsters immune to antibiotics. Despite Zyme's earlier claims, the bacteria monster smashes the lab window in. Zyme gets grabbed as the monster's hand comes down over him, while Viper takes Callie prisoner by grabbing her with his tail and gathers up armfuls of Katalyst 99.

The SWAT Kats lure the final bacteria monster onto a metal bridge with powerlines running over it, and cut the lines just as the creature passes under it. The downed lines fall onto and electrocute the last of Viper's monsters, killing it. They then fly back to Megakat Biochemical Labs, where they confront Viper, making him drop Callie. Unwilling to surrender, the evil scientist shakes up the containers of Katalyst 99, which turn out to be highly volatile; they explode when thrown, starting a huge fire. Before the flames can reach a store of flammable chemicals, the SWAT Kats and Callie fly safely away in the Turbokat as the building blows up, seemingly killing Dr. Viper.

After depositing Callie safely on the street, the SWAT Kats are yelled at Feral for cutting half the power to Megakat City when they severed the powerlines. T-Bone simply replies that if he knows a better way to "cook a giant bacteria," he should let them know. The SWAT Kats fly away, having a good chuckle at the sight of Burke and Murray having to clean up all the melted bacteria remains with a bulldozer.