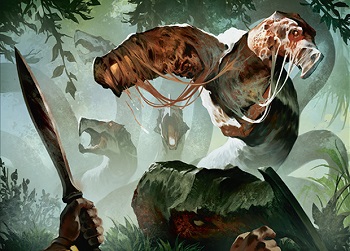 "WILL YOU FORGET THE HEAD-SLICING THING?!"
Kudos (Greek!) to Hercules for thinking outside the amphitheatre on this one [...] but it seems to me there was another way out. If he had just kept chopping, eventually the creature would have had a hundred thousand heads, making it look something like venomous reptilian broccoli. Then it would have tipped over and been no threat to anyone. People could come up and laugh at it, it would have been a great tourist attraction.
— Lore Sjöberg, The Book of Ratings
Advertisement:

This is where when you defeat an enemy, one or two more show up in its place, and so on until you perform some kind of specific attack to kill it for good. Named for the Hydra from Greek mythology, which had nine heads that grew two more heads whenever one was chopped off;note  Although some versions state it just keeps regenerating its severed heads instead of growing more, thus never having more than nine heads at a time the only way to destroy it was to cut off the heads and cauterize the stumps with fire before the head was able to grow back and multiply. Expect a lot of decapitation, even though this is probably the worst possible strategy to use.

Compare to Asteroids Monsters, in which a destroyed monster divides into several smaller versions of itself, and can only be defeated by killing all of the smallest-sized version, and Healing Factor. Solving this might involve the Gemini Destruction Law. The "hydra" will usually go for Not Quite Dead on the first go around. For general portrayals of actual hydras, see Our Hydras Are Different.