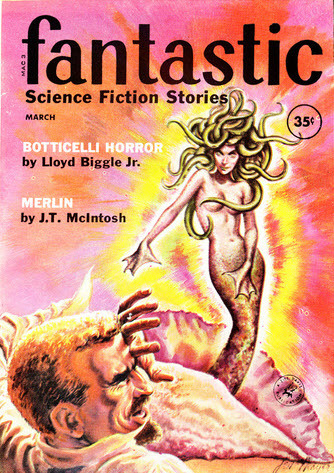 "The Botticelli Horror" is a short story by Lloyd Biggle, Jr. It was published in Fantastic Science Fiction in 1960 and is set in an unspecified future. Humanity has colonized the universe, but people still live on Earth. As with real world countries, the smuggling of rare and exotic animals from planet to planet is a huge problem. Allen works as an inspector for a government agency known as Terran Customs, and he and his colleague Dr. Ralph Hilks have been sent to the Kansas town of Gwinn Center to investigate the grisly murder of two children and the maiming of a third: Sharon Brown, her sister Ruth and their friend Johnnie Larkins were attacked by something that killed the two sisters and left Johnnie, the child who survived, legless. Only one girl's head has been left behind, along with the kids' shoes; even the shoes of Johnnie, who lost his legs, were left. Local physician Dr. Anderson can't identify what could've attacked the three.

The local authorities, Commissioner Cornley and Sheriff Townsend, are blaming Elmer, a giant Venusian snail owned by a man named Bronsky who regularly performs in a local carnival; Elmer can shapeshift, and his most popular act is to form himself into a replica of the figure from Sandro Botticelli's painting The Birth of Venus, owing to his shell. Allen and Hilks are on hand to ensure Elmer was brought to Earth legally and whether Bronsky can be held responsible for the snail's crimes... assuming he did in fact kill the children.

Allen is skeptical. He knows a lot about alien wildlife, and although Elmer did escape from the carnival around the same time that Sharon, Ruth and Johnnie were attacked, nothing about the attack matches what he knows about giant Venusian snails, nor does it square with Bronsky's insistence that Elmer is gentle and friendly. His suspicions are confirmed when the surviving child, Johnnie, gives a description of what attacked him and his friends that doesn't even remotely describe Elmer, and Allen realizes that they're dealing with an illegally imported Venusian Night Cloak, a flying creature that envelopes its victims and eats them, with a tendency to only ever leave their shoes behind...