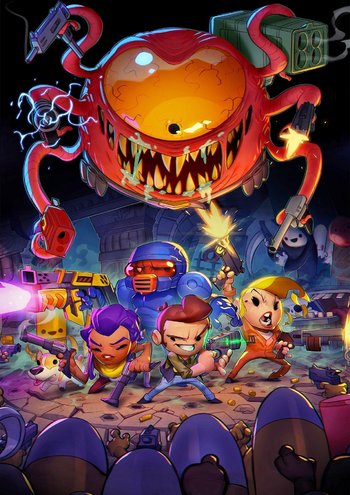 Kill your past; you've already damned your future.note Clockwise, from top: The Beholster, The Marine, The Convict, The Pilot and The Hunter. Not shown are The Cultist.
Throughout the galaxy, a legend is told. On a distant planet, a grim fortress stood, until a deadly force parted the heavens and descended upon the keep. Though brought to ruin, the ashes of that place hold an artifact of impossible power. A gun that can kill the past. Over time, the fortress was rebuilt, and some who hear the legend would risk everything for another shot. To claim their prize and make what was done, undone, they must... (cue Title Drop)
— Opening narration
Advertisement:

Enter the Gungeon is a Bullet Hell Run-and-Gun Roguelike developed by Dodge Roll Games and published by Devolver Digital.

There is a legend told throughout the galaxy: that many years ago, on the planet Gunymede, a massive bullet fell from space and embedded itself in the earth. This bullet formed the Gungeon, a sprawling, shape-shifting fortress protected by the Cult of the Gundead. Within the Gungeon, say these legends, lies a weapon of unimaginable power: a gun that can kill the past. And so it is that adventurers, known as Gungeoneers, flock to the Gungeon, seeking to right the wrongs of their pasts... if they can make it past the Gungeon's many traps and terrors...

Enter the Gungeon borrows equally from the Roguelike and Bullet Hell genres: it has the core gameplay of the former (multiple randomly generated runs, acquiring permanent buffs, Permadeath, etc.), but marries it with the More Dakka attack patterns (from both you and the enemies) of the latter. Add in the ability to dodge roll out of the way of projectiles, flip tables to create cover, and more guns than you can shake a mag at, and you've got Enter the Gungeon.

The game received a free content update by the name of Supply Drop in the early weeks of 2017, which re-added content cut from the game before release due to time constraints. The update includes new rooms, guns, bosses, and much more. Another free update named Advanced Gungeons & Dragons launched on July 19th 2018, bringing with it new guns and items, new rooms, hundreds of new item synergies, and a new secret area. The final update, A Farewell to Arms, was released on April 5th, 2019, bringing with it a whole bunch of new additions; including two new playable characters, new guns and items, a new secret floor & boss, and a host of other features.The game was originally launched on Steam and the Playstation 4 on April 5th, 2016, before receiving releases on the Xbox One exactly one year after its original release on April 5th, 2017, and on the Nintendo Switch on December 14th, 2017.

A sequel/spin-off known as Exit the Gungeon was announced September 11th 2019 and released on Apple Arcade, as well on PC and consoles in 2020. An arcade spin-off game inspired by House of the Dead called House of the Gundead was also released that same year.

YOU DIED
Killed by:
TVTropes Addiction
The Past still haunts you