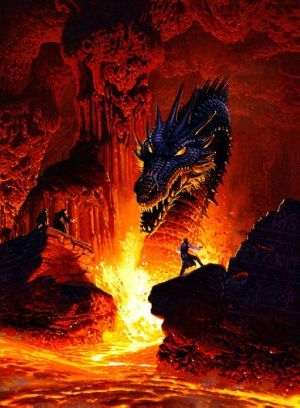 The Earth was destroyed.
Four worlds were created out of the ruin. Worlds for ourselves and the mensch: Air, Fire, Stone, Water.
Four Gates connect each world to the other: Arianus to Pryan to Abarrach to Chelestra.
A house of correction was built for our enemies: the Labyrinth.
The Labyrinth is connected to the other worlds through the Fifth Gate: the Nexus.
The Sixth Gate is the center, permitting entry: the Vortex.
And all was accomplished through the Seventh Gate.
The end was the beginning.
[in scrawled handwriting, possibly in blood] The beginning was our end.
Advertisement:

Series of seven High Fantasy novels by Margaret Weis and Tracy Hickman, generally considered one of their best works.

In the backstory, nuclear war devastated Planet Earth, and several new races mutated out of humanity. The two most powerful were humans with demigod-like powers: the Sartan and the Patryn. These two races began to war over who would rule; eventually, the Sartan secured victory by remaking the Earth into four separate worlds, one for each element, which would then work together in harmony. (That's their children's catechism quoted above.) They imprisoned the Patryn within a "correctional facility", the Labyrinth, and built Death's Gate itself as the central nexus which made the whole Portal Network function. It was A Simple Plan. What Could Possibly Go Wrong?

Well. The Labyrinth went Off the Rails in a big way, turning from a giant maze into a Death World that took the Patryn untold generations to escape. Meanwhile, the four worlds descended into factionalism and chaos as humans, dwarves and elves began to fight amongst themselves. The sole exception was Abbarach, the World of Stone, where the mensch simply died out due to the world's volcanic atmosphere and the Sartan went their own way. None of this was according to plan, and the Sartan called to each other for help that never came. In the end, they declared it someone else's problem and put themselves into Human Popsicle beds to let things sort themselves out on their own.

And then the Patryn finally got loose.

The main character of the series is Haplo, a Patryn Villain Protagonist who, as of the first book, is sent out through Death's Gate to investigate the other worlds on behalf of his master, Lord Xar. His orders are a classic bait-and-switch: if Haplo causes as much chaos and death as possible, Xar can come in as the Big Damn Heroes later. The Sartan are also returning to finish their plan for utopia... at least, in the worlds where they aren't dead. Alfred, the other main character, is the Last of His Kind from Arianus, a Sartan whose power is equaled only by his clumsiness. Both races discover, however, that there are far more dangerous things in the universe than each other...

The books are divided into two broad arcs; books 1-4 deal with Haplo's explorations of each of the elemental worlds in turn and the search for answers over the disappearance of the Sartan, while books 5-7 deal with the broader conflict that engulfs all the worlds. They are, in order:

The series was adapted into a graphical Adventure Game called Death Gate.