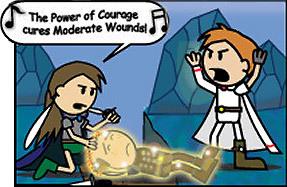 Customer: Ah, but you forget: I have a green clarinet that makes you tell embarrassing truths.
Waiter: Ah yes. But now I have a red tuba which makes you shit yourself!
— That Mitchell and Webb Look
Advertisement:

A type of Functional Magic that works via music: playing a certain song or a magical instrument that causes a spell-like effect to happen. This may have derived from the premise of there being legitimate power within the words one uses, which is somewhat akin to true name magic in this regard.

A Wandering Minstrel, Magical Flutist or Music Meister may have this as their main method of fighting. The Musical Assassin uses a particularly nasty variant. Often shows up as the Sub-Trope, Mind-Control Music, or also commonly it can buff allies in a justified Theme Music Power-Up.

Villains who use magic like this are often foiled by would-be victims who are hearing impaired.

Ocarinas are a popular instrument for this. Perhaps this is due to its ancient history, or its simple, yet exotic sound. Maybe it's because Link used one in The Legend of Zelda: Ocarina of Time. It certainly doesn't hurt that they are easily portable which justifies their use in a more action-packed adventure.

Speaking of "ancient history", this trope is definitely Older Than Feudalism (the tales of Orpheus date as far back as 5th century BC) and possibly Older Than Dirt.

Disco Tech is the tech equivalent. Compare with The Power of Rock, Brown Note and, Magic Dance. Also see the Sub-Trope, Mind-Control Music.

Witches in this coven channel their magic through their music and performances to either put people or objects under their sway, disrupt the magic of others, or just straight up fire sonic blades at their enemies.

Witches in this coven channel their magic through their music and performances to either put people or objects under their sway, disrupt the magic of others, or just straight up fire sonic blades at their enemies.