Western Animation / Tales of the Night 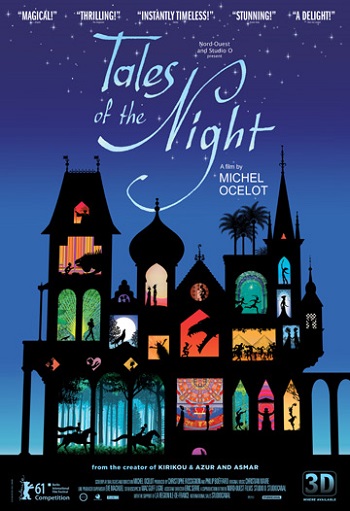 Les Contes de la nuit (Tales of the Night) is a 2011 French animated film directed by Michel Ocelot. The film is comprised of six fairy tales, five of which first ran on TV in France as part of the Dragons et princesses (Dragons and Princesses) anthology. The sixth short is new to Tales of the Night. The story is framed with an old man (who used to work in a cinema) who mentors two young actors, helping them plan and act out their stories. The six stories are:

The film is visually striking, done in a shadow puppet style with crisp black silhouettes moving across a brightly-painted background. The stories are set in a variety of locales, from medieval Europe to Africa and Tibet. It's also notable that each of the stories contains a twist or Subverted Trope.