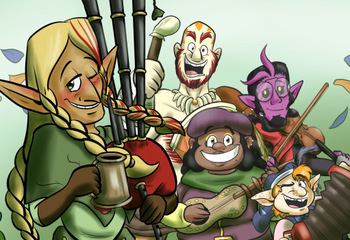 As summer comes to an end in the kingdom of Prismal, the Bardic Festival is in full swing, bringing together musicians and minstrels from all over. But amidst the celebration, a sinister plot of murder unfolds…
Advertisement:

is an original fantasy webcomic written and drawn by Kelsey Peterson, otherwise known as Nintendonut1. It was recently moved to Spider Forest.

It follows a ragtag group of bards as they band together and travel the realm of Prismal; Merlow the Rose, half-elf, charismatic leader, bagpiper, and perpetual drunk; Diana the Fleetfoot Fletcher, human tidinit player with a heart of gold; Nocturne, brooding but classy Infernal and violinist; Sven Rockscreamer, goliath drummer and seeker of justice; and Feliks Halfdance, curious gnome who plays accordion and magically conjures their entire backup.

And who knows! Mayhaps they'll solve a murder mystery together!

Tropes appearing in Court of Roses include: