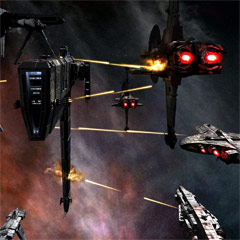 is a Sci-Fi webcomic created by David C. Simon. Volume 1 ran from 2006 to 2012, ending when Mr. Simon moved to Austin, Texas to work on Star Wars: The Old Republic for Bioware. He came back to the comic four years later, publishing a one-shot story in October 2016, then starting Volume 2 in November.

Kari Tyrell is a fighter pilot in the Republic of Daranir's military, who are at war with the Cirin Alliance. She's become something of a hero of the Darani military, (supposedly) turning the Battle for White-Rim around singlehandedly. However, her carrier is later unceremoniously destroyed by a Cirin ambush, and she's written of as dead. As she would later find out, she's more useful to the military as a martyr rather than a pilot, so she agrees to stay "dead" and join up with a privateer group under the command of one Vaegyr Ward.

The comic uses both 3D renders (done in Poser 4) and a heavy amount of Photoshopping on top of them (for example, the clothes are done in photoshop, as are explosions). The author is a big fan of Firefly, but the comic had an engaging and complex story of its own, with a familiar but distinct setting.

The main storyline concluded in 2020, though Simon said he might return to the comic sometime for more minor stories within the same universe (but probably won't).

Tropes seen in this webcomic: