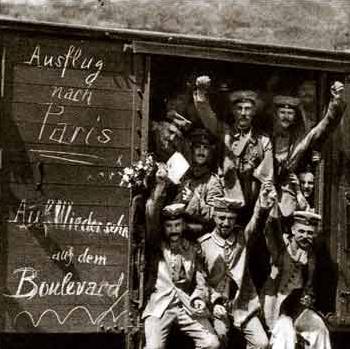 The writing reads, 'Day trip to Paris' and 'See you on the boulevard'. Harsher in Hindsight, indeed.
"Months earlier, when Siétamo was taken, the general commanding the Government troops had said gaily: 'Tomorrow we'll have coffee in Huesca.' It turned out that he was mistaken. There had been bloody attacks, but the town did not fall, and 'Tomorrow we'll have coffee in Huesca' became a standing joke throughout the army. If I ever go back to Spain I shall make a point of having a cup of coffee in Huesca."
— George Orwell, Homage to Catalonia
Advertisement:

So you're at war, and you're preparing for a big offensive that will finally turn the tide in your favour. You have A Simple Plan for the whole affair, and your Redshirt Army far outnumbers the Mooks defending the city, bridge, fortress, or whatever strategical MacGuffin you're planning to seize. You are all but assured that the upcoming battle will be a Curb-Stomp Battle in your favor... and you confidently announce, "Nothing Can Stop Us Now!" After all, What Could Possibly Go Wrong?

Quite a lot, actually.

This trope is about overconfidence in a war situation, be it about the entire war or a specific attack — the point is that what is assumed beforehand to end in a quick and easy victory will turn into a long and grueling battle (or even a quick and easy defeat) instead. If it goes really wrong, it could end up as a Shocking Defeat Legacy. This makes any statements of confidence about the matter, such as "Tomorrow we'll have coffee in Huesca" in the page quote, a lot Harsher in Hindsight.

Very often Truth in Television. The idea of getting your troops "home before Christmas" was highly sought after by military forces, especially those fighting in the extreme latitudes; not only is it a great boasting point to get your boys home in time for turkey dinner and presents under the tree, it also served in a practical sense, as winter is a harsh and brutal time to be outside, and any army that marches in the snow is almost guaranteed to take significant losses from the cold alone. Compare It Seemed Like a Good Idea at the Time. Not to be confused with Hurrying Home for the Holidays, a plot where a character has trouble getting home for the holidays.