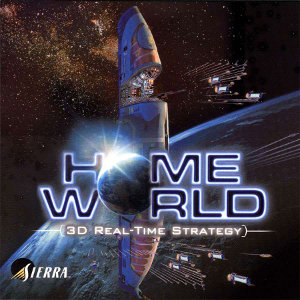 We follow the Sun.
"100 years ago, a satellite detected an object under the sands of the Great Desert. An expedition was sent. [They found] An ancient starship, buried in the sand. Deep inside the ruin was a single stone that would change the course of our history forever. On the stone was etched a galactic map and a single word more ancient than the clans themselves:
'Hiigara'. Our home.
The clans were united, and a massive colony ship was designed. ... The promise of the Guidestone united the entire population. Every mind became focused on the true origin of our people, every effort on the construction of the ship that would seek it out amongst the stars."
— Homeworld, Opening Monologue
Advertisement:

The game drops players straight into a David vs. Goliath story starring the Mothership, which — (First-Episode Spoiler) one Doomed Hometown later — is the Last of Their Kind. The Video Game Caring Potential of shepherding this freighted marvel is underlined by the game's persistent fleet mechanics; what you have at the end of this mission is what you have when you start the next one. Additionally, the player is able to augment their fleet by stealing enemy ships, many of which cannot be built by the Mothership, creating a very visual picture of their success — and, when any such ship is lost, failure — as a fleet commander.

Two sequels were released in the series:

The series was put on hold when Sierra sold Relic to Vivendi Universal but kept the rights to the Homeworld franchise for itself. A resolution finally arrived in 2013 when the bankrupt THQ auctioned off

Since then, four other titles have been announced: