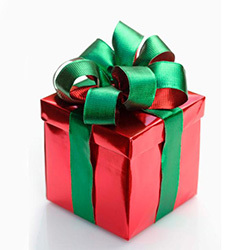 "Oh, you don't have to untie that. It's just a box made to look like I spent a lot of time wrapping it."
— Connie Maheswaran, Steven Universe
Advertisement:

Normal people wrap presents such that they are entirely enveloped by wrapping paper, which must be torn off before the contents can be revealed. This is a theoretically simple process that requires a minimum of cutting, taping and assembly (theoretically — many a comedy has enjoyed a catastrophic gift-wrapping sequence). It also ensures that there is no easy accidental reveal of the hidden gift.

In the world of Hollywood, though, there is a bizarro style of wrapping that is used instead: a box and a lid are each wrapped separately, the gift (usually devoid of any manufacturer's packaging) placed within, and the lid simply set upon the box. Nothing (except, rarely, a ribbon) secures the lid to the box. It goes without saying that this is a far more complicated style of wrapping that takes longer and is far less secure than the usual. The point, of course, is to make it easy to quickly show the contents of the box within the limited time of a television program, and to avoid the need for time-consuming rewrapping between takes. It also avoids continuity errors while shooting coverage. And, of course, if it's a cartoon, it's easier to animate it this way as well.

The usual exception to this trope is Christmas gifts for children; the shredding of wrapping on the way to getting to the gift is expected and even Hollywood can't ignore that for its own benefit.

Beautifully decorated boxes intended for this use have become Defictionalized in recent years — presumably either for the benefit of un-dexterous givers or similarly challenged recipients.