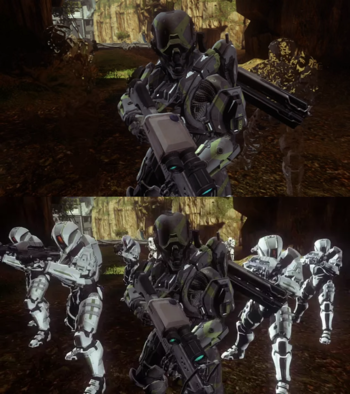 The hero/villain has defeated their final target, they stand triumphant, only for an entire army to appear out of thin air, apparently they were all hiding, waiting for a signal of some kind.

This army could be as few as four or as many as thousands, but they must appear out of nowhere and surround the character.

The method of hiding isn't important as long as the area appears empty on initial inspection and leaves the character wondering where the hell they came from.

Related to You and What Army? and The Cavalry.

Note: To clear up any possible confusion. For something to be an example of this trope the army in question needs to be physically present, but not visible. This means teleporting in armies don't count. This trope can overlap with You and What Army? and The Cavalry, indeed an example might be present on all three trope pages.