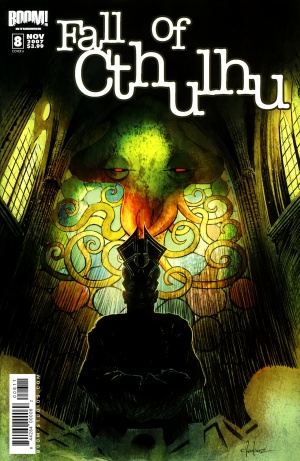 "You do not @#$% with Cthulhu."
"The silent hordes of sleeping Cthulhu are stirring, their arms raised in war against great Nodens and his heathen ilk. Their war will wake the Old One and usher in an age of darkness."
Advertisement:

If the bigger they are, the harder they fall, then what happens when the gods themselves fall?

Fall Of Cthulhu is a comic book series published by Boom! Studios and based on the works of H. P. Lovecraft. The series follows a few unfortunate mortals as they're entangled in the conspiracies and manipulations of the Great Old Ones and the Outer Gods, who prepare for war against Nodens and the Elder Gods, and the apocalypse that will inevitably ensue. Said characters include academic turned mental patient Cy Morgan (whose uncle's research introduces the plot), Brazilian street rat Luci Jenifer Inacio das Neves (a.k.a. Lucifer), local sheriff in over his head Raymond Dirk, and lastly, the enigmatic hostel owner Mr. Arkham.

In its own way, the comic acts as a Crisis Crossover for the Cthulhu Mythos, gathering the classic elements from Lovecraft's fiction to mingle with whole new creations. Furthermore, each artist on the title brings his or her own brand of slightly off-kilter illustration, including subtle, yet effective Art Shifts whenever the bewildered human characters are dropped into the Dreamlands.

In addition to the first volume, Fall Of Cthulhu continues in two miniseries (Godwars and Apocalypse) and has spawned three spin-offs: Cthulhu Tales

, a Lovecraft-grounded anthology title, Hexed, continuing Lucifer's misadventures in eldritch thieving, and a proper sequel, The Calling: The Cthulhu Chronicles