Film / The Lord of the Rings: The Two Towers 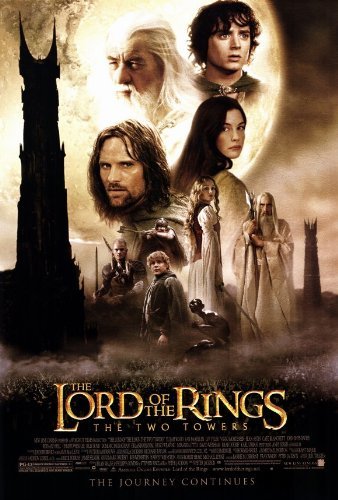 "The adventure continues."
Samwise: By rights we shouldn’t even be here. But we are. It’s like in the great stories, Mr. Frodo. The ones that really mattered. Full of darkness and danger they were. And sometimes you didn’t want to know the end. Because how could the end be happy? How could the world go back to the way it was when so much bad had happened? But in the end, it’s only a passing thing, this shadow. Even darkness must pass. A new day will come. And when the sun shines it will shine out the clearer. Those were the stories that stayed with you. That meant something. Even if you were too small to understand why. But I think, Mr. Frodo, I do understand. I know now. Folk in those stories had lots of chances of turning back, only they didn’t. They kept going. Because they were holding on to something.
Advertisement:
Frodo: What are we holding on to, Sam?
Samwise: That there’s some good in this world, Mr. Frodo. And it’s worth fighting for.

The Lord of the Rings: The Two Towers is a 2002 High Fantasy film based off the J. R. R. Tolkien novel of the same name. The second chapter of the Lord of the Rings film trilogy following The Fellowship of the Ring, it was directed by Peter Jackson and released in December 2002.

After the Fellowship of the Ring broke apart, Frodo and Sam continue their journey towards Mordor with the One Ring, and encounter the devious creature known as Gollum, who held onto the ring for hundreds of years and has been stalking them for a while. Pippin and Merry manage to escape their Uruk-hai captors and ally themselves to the Ents, living humanoid trees whose millennia old forest has been devastated by the armies of Saruman, who is allied to the forces of Sauron and wages a war of annihilation against the human kingdom of Rohan.

Meanwhile, Aragorn, Gimli and Legolas encounter a resurrected Gandalf, and the four of them set out to help the Rohan and its king Théoden against the incoming Uruk-hai forces of Isengard after freeing Théoden from Saruman's mental grip. To stand a chance against the gigantic and implacable army of Saruman, the people of Rohan, Aragorn, Gimli and Legolas entrench themselves in the fortress of Helm's Deep, hoping for reinforcements that Gandalf has gone to seek.

It became the highest grossing movie of 2002.

Example of:
Evil Tower of Ominousness