Buried in a Pile of Corpses 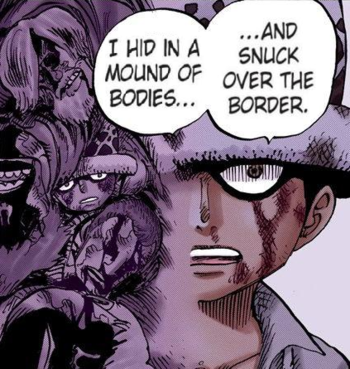 He will need lots and lots of therapy.
"I spent the night buried in that pile of corpses. Call it paranoia, but I had this feeling that they were waiting for me to show myself. So I stayed there in a state of abject terror, covered with spilled guts, brains, blood, excrement... the essence of human mortality."
— Officer Rosco, Judge Dredd
Advertisement:

A Sub-Trope of Playing Possum where a character is either in or puts themselves in a pile of dead bodies, either on purpose to avoid being found or as a result of the carnage around them. If the person this happens to is a child it definitely falls under Harmful to Minors and can be a Freudian Excuse for a mentally ill character, since it's pretty much by definition a traumatizing experience.

If a character uses this tactic on purpose to conceal themselves so they can attack expect them to be a Combat Pragmatist at best and a Dirty Coward at worst, and if other characters see them doing this they may react with disgust since it's both disrespectful to the dead and dirty fighting.

Compare Atop a Mountain of Corpses, which is usually more triumphant but may begin with a character being buried within it. Waking Up at the Morgue is thematically related. Not to be confused with Pretend We're Dead, where a living character pretends to be undead.