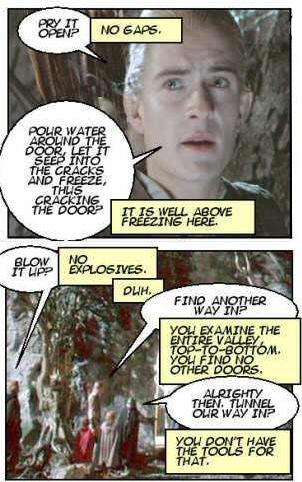 "It is an old maxim of mine that when you have excluded the impossible, whatever remains, however improbable, must be the truth."
— Sherlock Holmes, The Adventure of the Beryl Coronet
Advertisement:

Subtrope of Trial-and-Error Gameplay. The inevitable process where, lacking a guide or any hope of solution after they'd exhausted the saner, more rational responses, people will, out of frustration, resort to using every single item/trying every option with every other item/funnily shaped spot on wall/steampunk eggplant. As the reasoning goes, you've tried everything else, why not Try Everything? Has varying chances of success and limited efficiency, but sometimes it's the only option. In real life too (commonly referred to as "Brute Forcing"). Can lead to people shouting, "Guide Dang It!!", because, really, if you're just trying everything rather than reasoning through it, it's just as brainless as consulting a guide — and it takes a lot longer.

Related to Solve the Soup Cans, where it's about situations that are impossible unless this is employed. Also related to Speak Friend and Enter, where the solution is so obvious that you Try Everything before you consider it.

See also Million-to-One Chance. Compare Talk to Everyone and Combinatorial Explosion, where the developers have the headache of coping with lots of items and only one way to do it. Related to a Pixel Hunt, where finding that elusive clickable hotspot often devolves into just clicking everything until something happens. If the game tends to say "I Can't Use These Things Together" or "You Can't Get Ye Flask", a player who is Trying Everything will likely get very sick of hearing it.

This is an interactive version of How Do I Shot Web? May result from Enter Solution Here.

Not to be confused with the Shakira song from Zootopia, which is a song about experiencing all that life has to offer even if you fail.