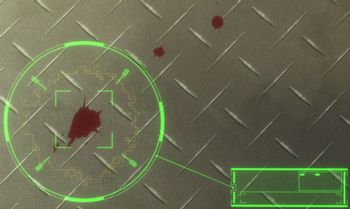 Someone was shot, that's for certain.
Drake: Hang on a moment. I smell something.
Mash: What is it?
Drake: Blood... Well, with my job, I'm used to smelling stuff like this.
Mash: Look, the drops form a trail.
Drake: Looks like the wound itself wasn't too bad. A flesh wound.
Mash: It's our only clue. We should follow it!
— Fate/Grand Order
Advertisement:

Following footprints in the mud or using hounds to sniff out a scent are just two of many ways to track down fleeing persons, but none are as dramatic as following a trail left by the mark's blood. Not only does it lead the pursuers right to their target, but it also highlights the fact that the fleeing character is wounded, creating additional drama by constantly making him weaker and bringing him closer to death.

In a variation, the trail of blood comes from a body that has been dragged away, but in that case the amount of blood rarely leaves any hope that the person could still be alive. Still, any characters who come upon such a trail will also follow it to whatever gruesome sight awaits them.

In other cases, the heroes or the villains would find themselves to be vulnerable when they follow it to a bad situation, such as an ambush or a sneak attack.

Compare to Detectives Follow Footprints, Footprints of Muck and Trail of Bread Crumbs. No relation to If It Bleeds, It Leads.