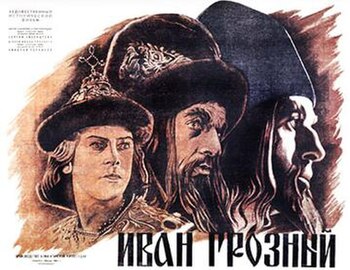 Ivan the Terrible (Russian Иван Грозный, Ivan Groznyy) is a 1944 Soviet Russian film duology, Sergei Eisenstein's second (and last) sound film and a Spiritual Successor to Alexander Nevsky made during World War II with Nikolay Cherkasov in the main role once again. The first film had the support and help of Josef Stalin, whose personality-cult invoked Tsar Ivan IV "The Terrible", who was in any case a popular monarch in Russia.

This highly stylized two-part film chronicles the rise of Ivan from a Prince henpecked by the Boyars, feudal nobleman, to a Tsar who will unite Russia into a gigantic kingdom. Part 1 chronicles the Prince's marriage, his benign and happy early years, his wars in the Kazan, personal tragedy and eventual rise. Part 2 shows the Prince preparing to stave off the Boyars from making a resurgence, establishing his special secret police, the Oprichniki, and finally embracing his destiny to be Groznyy (Terrible).

Eisenstein conceived of the film as a trilogy, yet only two parts were finished, with Part III being cancelled in mid-production, followed by Eisenstein's death a brief while later. Part I released in 1944 earned the director the Stalin Prize (Soviet Nobel Prize-cum-Oscar) and was well received internationally. The second part, shot back-to-back with the first one, was completed in 1946. However it was shelved, and it was released only in 1958 long after Eisenstein's and Stalin's death. Part II became especially famous for its color sequence (shot on Agfacolor film stock captured by Red Army troops in Nazi Germany).

It is regarded as a classic of Soviet/Russian and world cinema and is available on The Criterion Collection.