Devoured by the Horde 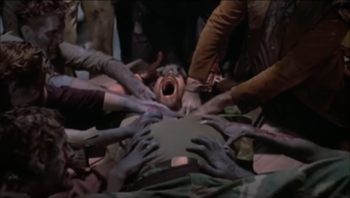 There's enough for everyone.
Mr. Krabs: Oh, no. I've seen this on the late show! You ghoulish fiends hold me down and take turns nibbling on my innards! Then you eat my brain and leave my body for the buzzards!
Smitty WerbenJagerManJensen: That's disgusting! We just want the hat back.
— Spongebob Squarepants, "One Krab's Trash"
Advertisement:

Devoured by the Horde is when a characters gets eaten or torn apart by multiple parties. This is very common during a Zombie Apocalypse if someone is overwhelmed by zombies and they can't kill them all or escape from them. This can also happen outside a zombie apocalypse, other people, animals, or creatures can do the same thing with the right amount of numbers, regardless of size. This can also happen if a character is thrown into a Shark Pool (or more commonly in this case, a piranha pool) and actually gets eaten by the creatures. Sometimes when the body is devoured, only the skeleton will remain.

For this to count there must be at least a minimum of two people/animals/creatures devouring someone/something that is alive. They also don't have to be eaten, they can also have their body torn apart. This doesn't have to include literal zombies, any flesh-eaters will do. If the person or thing died very recently before being devoured or torn apart, it counts if the victim's body is still warm; especially if there are times where someone will shoot the person being eaten as a mercy before the horde can get very far.

A sub-trope of Eaten Alive.

Compare Torn Apart by the Mob.

See also Dog Pile of Doom, of which this is one possible result. This is usually combined with Zerg Rush.

Warning: This is a Death Trope. Expect lots of unmarked spoilers.