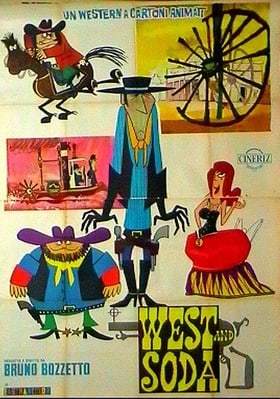 West and Soda (a.k.a. The West Way Out) is a 1965 Italian animated film by Bruno Bozzetto. Although technically a Spaghetti Western (and a rare animated one), it is a pastiche of Western movies from The Golden Age of Hollywood.

Land baron Il Cattivissimo finds that there is gold on farmer girl Clementina's land so he plans to marry her so that he can have the gold and the land for himself. But a stranger named Johnny arrives on Clementina's ranch. Johnny is a former gunfighter turned sworn pacifist trying to drop his habit of killing. But when Clementina is abducted, Johnny must reclaim his old habits if he wants to save her and her land.