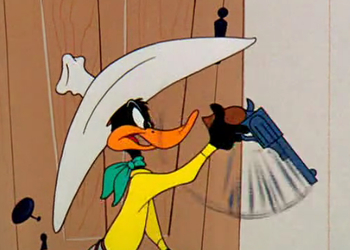 Ballistic buffoonery begets backwards beaks.
"You know, when you twirl your gun like that, you kinda look like a dick."
— Forum Roleplay, IC.
Advertisement:

A character spins a gun around their finger by the trigger guard. This breaks pretty much every rule of gun safety at once, but at least it looks cool. A frequent comedy variation is for a gunslinger to do this successfully, and then have some hapless sap try it, only for something to go wrong.

This trope, like several other Guns and Gunplay Tropes, originated in Westerns. It was possible to do this relatively safely with the gun commonly used in the period — the single-action revolver — because it takes two actions to fire it: first cock the hammer, then pull the trigger. Also, it was common for the revolver to be carried with an empty chamber in front of the hammer to reduce the chance of accidental discharge; most "six-shooters" thus held only five bullets. Even so, accidentally dropping the gun while twirling it could result in it landing on the hammer, and if a live round was in position, it would fire.

With double-action revolvers, pulling the trigger first cocks the hammer and then releases it, so twirling a revolver around by the trigger is a great way to fire it in some random direction, such as at yourself, or the person standing next to you. Even if you get lucky and don't hit anything important, the recoil will probably break your finger.

With the earliest revolvers, this actually had a practical purpose: primitive cartridges tended to leave "fouling" (powder residue, pieces of the casing, etc.) in the barrel and firing chamber. Spinning helped shake them loose so they wouldn't accumulate and jam the weapon; but with any gun made after the mid-1800s, this is completely unnecessary.

Officer Alex J. Murphy practices twirling his gun to impress his son (also, because he thinks it's cool himself).

Officer Alex J. Murphy practices twirling his gun to impress his son (also, because he thinks it's cool himself).