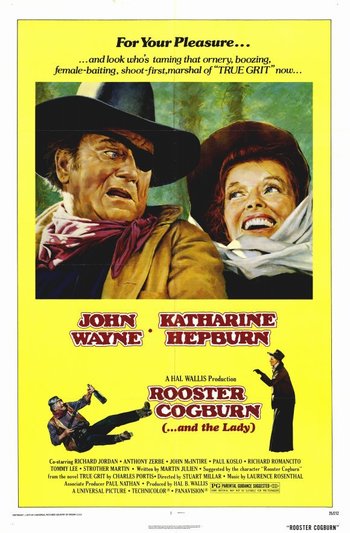 Rooster Cogburn, also known as Rooster Cogburn (... and the Lady), is a 1975 film, ad the sequel to the 1969 western True Grit. The film stars John Wayne, in his penultimate film, who reprises his role as U.S. Marshal Reuben J. "Rooster" Cogburn. Katharine Hepburn co-stars as spinster Eula Goodnight, who teams up with Rooster to recover a stolen shipment of nitroglycerin and find her father's killer.
Advertisement:

Because of his drunkenness and questionable use of firearms, aging U.S. Marshal Rooster Cogburn has been stripped of his badge. But he's given a chance to redeem himself after a village in Indian Territory is overrun by a gang of violent, ruthless criminals, who've killed an elderly preacher, Rev. George Goodnight. His spinster daughter, Eula Goodnight, wants to track the criminals down and makes Rooster an unwilling partner. But Rooster must use care, because the criminals, led by Hawk and Breed, have stolen a shipment of nitroglycerine.