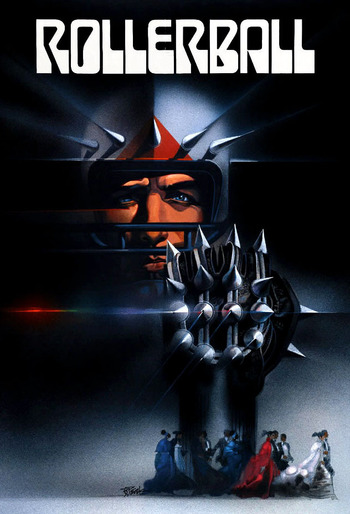 Wholesome Family Entertainment.
"The game was created to demonstrate the futility of individual effort. And the game must do its work. The Energy Corporation has done all it can, and if a champion defeats the meaning for which the game was designed, then he must lose. I hope you agree with my reasoning."
— Bartholomew
Advertisement:

The story is set 20 Minutes into the Future, when everything is controlled by Mega Corps that keep the unwashed masses happy the best way they know how: full contact Blood Sport!

The sport, Rollerball, is like Roller Derby on speed. Players come and go (usually violently), as the sport is meant to suppress individuality. That changes when our hero, Jonathan E (Caan), becomes a Rollerball star and refuses to retire. The executives don't like that and start making changes to the game in an effort to kill Jonathan.

There's also a 2002 remake, directed by John McTiernan (who disowned it because of massive Executive Meddling) and starring Chris Klein as Jonathan, which features twice the blood, as well as Paul Heyman as a game announcer.

For the video pinball game from HAL Laboratory, click here.