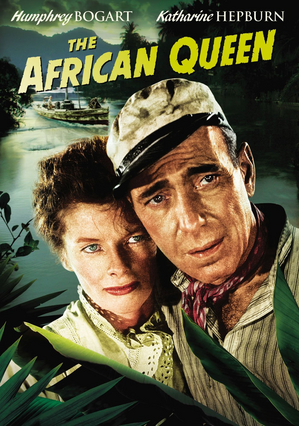 The African Queen is a 1951 romance/adventure film directed by John Huston, based on the 1935 novel by C. S. Forester, and starring Katharine Hepburn and Humphrey Bogart.
Advertisement:

Hepburn plays Rose Sayer, a missionary living with her brother in German East Africa at the start of World War I. Bogart plays Charlie Allnut, the hard-drinking man with a riverboat who, among other things, brings the mail from town every few weeks. When Rose's brother dies, Charlie offers to take her to the nearest town to catch a ship to Britain. Being gutsy as she is, Rose instead creates a daring plan to build a makeshift torpedo, sail down the river (which no one has ever done) and take out the Königin Luise, a ship patrolling the German-controlled lake that is the only thing standing in the way of the British army. This being a film with a man and a woman as its primary stars in the 1950s, naturally, they fall in love.

Bogart's role won him his only Oscar, while Hepburn would add yet another nomination to her impressive collection.

The Troubled Production film made such an impression on Hepburn she later wrote a book about it, entitled The Making of The African Queen: or How I Went To Africa With Bogie, Bacall and Huston and Almost Lost My Mind. Screenwriter Peter Viertel also wrote a novel about the shoot that was later adapted by Clint Eastwood as White Hunter, Black Heart starring Eastwood as John Wilson (a Huston Expy). This film is notable for how damn long it took to come out on DVD despite widespread interest: it only came out in 2010, at least in the US. (An earlier British DVD was taken from a faded print. Later DVD and Blu-Ray releases are fully remastered.)

Rooster Cogburn, the sequel to 1969's True Grit starring John Wayne, co-starred Hepburn and was reputedly heavily inspired by this film (when it wasn't rehashing the first film.) It was even marketed as Rooster Cogburn (...and the Lady) to promote Hepburn in a manner reminiscent of this film.