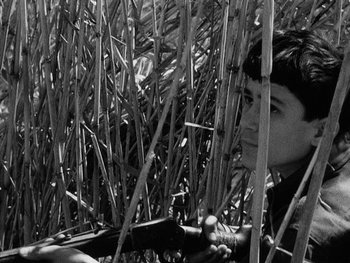 Louisiana Story is a 1948 film directed by Robert Flaherty.

It is a somewhat plotless tale, filmed in quasi-documentary style, of a young boy, Alexander Napoleon Ulysses Latour, living in the Louisiana bayou. Alexander, a young Cajun, roams around the backwoods of the bayou with his pet raccoon. An oil company arrives to drill for oil behind his father's house, but the oil company and the Le Tour family get along fine. More conflict is produced when an alligator eats Alexander's raccoon.

Louisiana Story was commissioned by Standard Oil in an effort to convince people that drilling for oil in the Louisiana swamps would not render them a filthy, befouled mess. It was the final film for Flaherty, the father of the documentary feature whose career dated back to Nanook of the North in 1922. However this film, unlike Nanook, doesn't really even pretend to be a documentary.