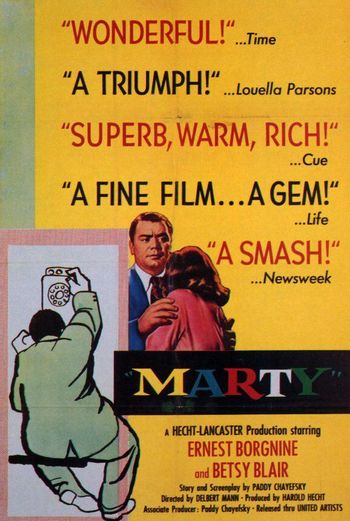 "See, dogs like us, we ain't such dogs as we think we are."
— Marty Pilletti
Advertisement:

A 1955 film directed by Delbert Mann and co-produced by Burt Lancaster, Marty was based on a 1953 teleplay of the same name by Paddy Chayefsky, who also wrote the screenplay.

Marty Pilletti (Ernest Borgnine) is a Bronx butcher who lives with his mother. At 34, he's resigned himself to a lifetime of bachelorhood while his siblings have families of their own. Everything changes when he meets Clara (Betsy Blair), a schoolteacher who has also resigned herself to never finding love. Through each other, they find happiness.