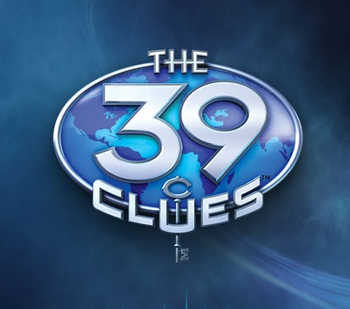 Let the hunt begin...
Amy: I mean, what could make somebody the most powerful Cahill in history? And why thirty-nine clues?
Dan: Thirty-nine is a sweet number. It's thirteen times three. It's also the sum of five prime numbers in a row - 3,5,7,11,13. And if you add the first three powers of three, 3 to the first, 3 to the second, and 3 to the third, you get thirty-nine.
Amy: How did you know that?
Dan: What do you mean? It's obvious.
— The Maze of Bones
Advertisement:

The answer is E, all of the above.

The book series by various authors,click for list Rick Riordan, Gordon Korman, Peter Lerangis, Jude Watson, Patrick Carman, Linda Sue Park, Margaret Peterson Haddix, Roland Smith, David Baldacci, Jeff Hirsch, Natalie Standiford, C. Alexander London, Sarwat Chadda, Jenny Goebel, Clifford Riley, Mallory Kass as well as the website, cards, and sweepstakes, deal with the Cahill family, one of the most powerful families the world has ever known, as almost every historical figure from the last five hundred years is related to them. The family is divided into one of four branches - the Ekaterina, who are the geniuses and inventors of the world, the Tomas, who are explorers and athletes, the Lucians, who are the spies, generals, and leaders, and the Janus, the artists, musicians, and authors.

When Grace Cahill, arguably one of the last genuinely nice Cahills, dies, she chooses to unveil her alternate will and kickstart a globe-trotting quest to find the source of the family's power. Such power can only be found by assembling all 39 Clues.

Our story begins when Amy and Dan Cahill, orphans who live with their disinterested great-aunt Beatrice, attend their grandmother Grace's funeral and the reading of her will. There, along with an assortment of colorful distant relatives, they make the choice: one million dollars or the chance to find the Clues alongside au pair Nellie Gomez. They choose to receive their first Clue, and are subsequently thrown into a five-hundred-year-old web of backstabbing, lies, and deceit. The first series follows them through the Clue hunt as they travel the globe, clash with their scheming relatives, and discover troubling truths about themselves and the Cahill family at large.

Flash forward two years to the beginning of the Sequel Series, Cahills vs. Vespers. The Clue hunt has ended, but a new threat has surfaced; it was revealed at the end of the first series that the Clue hunt was really only a practice run for a greater conflict between the Cahills and a previously unknown rival faction. This group, the Vespers, are allegedly so evil that they make the Big Bad of the first series look like Mother Teresa by comparison. Now the Vespers have begun making demands of the Cahill family, and the lives of seven hostages are at stake. Amy and Dan are once more sent on a trip around the world, frantically chasing down Vesper One's demands, while their teammates provide support from the Cahill Command Center, a computer lab that has been set up in Grace's mansion.

A third series, named Unstoppable, was published from late 2013 to 2014, dealing with some of the fallout from the conflict with the Vespers, with presidential candidate J. Rutherford Pierce serving as Big Bad. Scholastic proceeded to publish a fourth one, from early 2015 to mid 2016, in which a new villain with mysterious ties to Grace named the Outcast has taken control of much of the family's resources. A standalone novel named Outbreak was released in late 2016, dealing with the doings of a pharmaceutical company with which Sinead Starling was involved.

, but it seems to have been taken down; the address now redirects to the Scholastic Books web site. Character sheet is here, and individual books have recap pages here.

Warning: By definition, it is impossible to discuss a Sequel Series without spoiling the first series, so expect unmarked spoilers for Series 1 from here on out.

- this troper of might have trouble figuring out which one it is. but this was very obvious. in book 3 of this series, Amy says he has a face that no 12-year old should have. according to this page as of 2022 may. Dan is 13 in Cahills vs Vespers series. this is so no support even though I did not read the previous book series for multiple years, I even noticed, that the age is wrong.

Warning: Unmarked spoilers for Series 1 and possibly Series 2 below.