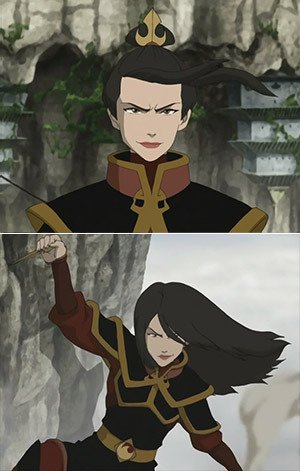 Hairpin up, hair down.
Advertisement:

If a character has long hair tied in a ponytail there is a chance that the hair will become undone during a fight or action scene. The probability of this happening increases with the intensity of the situation and the challenge the opponent poses. Of course, this isn't restricted to ponytails alone. Braids, twintails, hair loopies, and other hairstyles just begging to get undone while in the heat of battle also count.

It serves to give the character an instantly rougher, more primal and badass look that can underscore the seriousness or desperation of the situation. At the same time, unbound hair can also create a vulnerable look. In classical Japanese paintings defeated Samurai were often shown with messy or disheveled hair, so naturally many long haired anime characters end up looking like this when things are getting rough. It can also be used as Fanservice to make a character that much hotter while fighting, especially in combination with Clothing Damage.

Compare Close-Call Haircut. When the character undoes the hair willingly on camera see Shaking Her Hair Loose. If the ponytail gets severed completely, it becomes a Traumatic Haircut. If the character is using a Combat Haircomb to fasten their hair, then it naturally will go loose once used.

This can be very much Truth in Television, especially for those with hair that's not much longer than shoulder-length.

This has nothing to do with the Heavy Metal band Slipknot in ponytails.