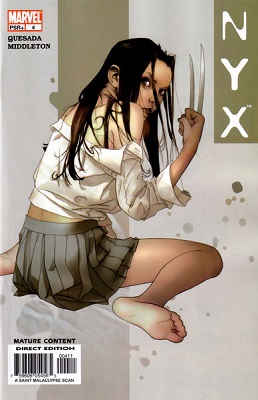 The only thing anyone remembers about the series...
Advertisement:

The first was NYX: Wannabe, a seven-issue miniseries written by Joe Quesada and Zeb Wells, with art by Joshua Middleton, Jean-Francois Beaulieu and lettered by Chris Eliopoulos. It first ran in 2003 before later being collected into a trade paperback, and focused primarily on a young homeless mutant named Kiden Nixon in a particularly rough part of New York City.

As a young child, Kiden witnesses the death of her police officer father in a drive-by shooting. Years later, she's a troubled teenager who stays out late partying, smokes, and uses recreational drugs. One day at school she gets into a fight with a fellow student who has gang connection, and during the confrontation her latent mutant powers activate, giving her a sort of time manipulation (time slows for everyone around her, but progresses normally for her, effectively giving her Super Speed and Super Reflexes. And Super Strength, when she snaps the gang-banger's arm with just a light touch). Unfortunately, the conflict between them escalates and an innocent bystander gets hurt in the crossfire, leading to Kiden fleeing to the streets, where she must learn to cope with her new powers. Over the course of the story, she gathers a small group of other castoff mutants: Tatiana Caban, a Shapeshifter who can take on aspects of any animal whose blood she comes in contact with, Bobby Soul—a Body Surfer going by the name of Felon who can take control of others by possessing them, at the expense of his memories of what he's done, or even who he is—and his little brother, known only as Lil' Bro. Last is a withdrawn teen prostitute with metal claws and whom no one knows who she is. Accompanying them is Kiden's former high school teacher, Cameron Palmer.

Now a relatively obscure title, today it's primarily memorable as the series which brought X-23 to the comics universe after first appearing in X-Men: Evolution.

A six-issue follow-up series, NYX: No Way Home, was released beginning in 2008, this time written by Marjorie Liu. This series followed Kiden, Bobby, Tatiana and Lil' Bro (X-23 having departed and eventually finding her way to the X-Men), as Kiden is pursued by a sinister force seeking to make use of her powers. Unlike Wannabe, which was largely self-contained and only loosely mentioned the larger Marvel universe, No Way Home featured appearances by significant characters such as Cable and Venom, an alternate universe version of Wolverine, and X-Men ally Cecilia Reyes.