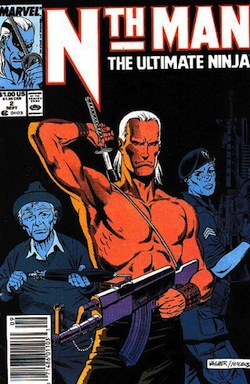 Nth Man: The Ultimate Ninja was a Comic Book series created by Larry Hama and published in 1989 by Marvel Comics. Though it only ran for sixteen issues, it is remembered as a quixotic blend of gritty realistic military action, fantastic ninja combat, and wide-eyed science-fiction.

The story begins six months after a powerful telekinetic named Alfie O'Meagan neutralized all of the world's nuclear weapons. With the balance of power abruptly upended, the world's superpowers immediately start waging World War III with conventional weapons. Among the chaos, the United States declares Alfie the most dangerous person on Earth, and retrieves the one person capable of killing him — John Doe, the Nth Man, the CIA's top assassin, the world's deadliest Ninja... and Alfie's childhood friend.

What follows is a whirlwind romp from war-torn Russia to the streets of Washington, D.C., while simultaneously strolling across time, space, and alternate dimensions. As Alfie's power grows, his sanity slips even further, with everyone else trying to make sense of it all. Ultimately, the complex storyline leaves both John and Alfie finding out more about themselves than they ever wanted to know, with an ending as twisted as the beginning.

Not to be confused with The Nth Doctor.