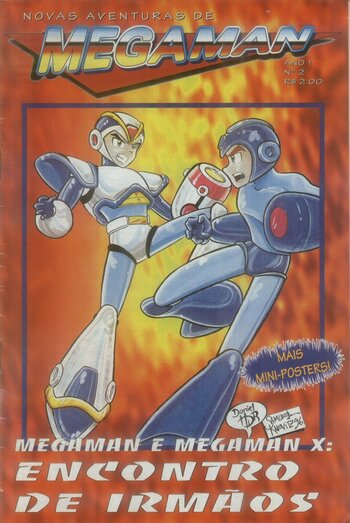 Novas Aventuras de Megaman (New Adventures of Megaman) is a 1990s Brazilian comic featuring the Blue Bomber, Mega Man, and some of his supporting cast and enemies. This is where the overlap between this continuity and that of the games ends.
Advertisement:

It's been 30 years since Dr. Wily took over the world, or at least Brazil, and most of the population is either dead or enslaved. Mega Man and Roll were unable to prevent this since they spent those years in power-up capsules. Dr. Light is deceased; the two must fend for themselves in this hostile place.

Thankfully, they quickly make an ally in X, their younger brother who has retired for unknown reasons, and soon the three of them are officially back in action. Unfortunately, things are only going to get worse from there...

That was the easy part. Unfortunately, the comic had so many retcons and continuity issues that sorting everything out is a bit of a chore. There's also plenty of artwork gaffes, since few of the artists chosen to draw for this comic retained many details from the past issues. NAdM was produced a bit differently than most other comics - the writers would produce a script, then have fan artists draw it; whoever's was the best would be selected for that issue. (It should be noted that only one artist, Rogerio Hanata, illustrated more than a single issue; also, artists would eventually write the scripts as well.)

Unfortunately, the publisher folded before the comic (and another series detailing events post-X4, before X5 was released) was completed, leaving many story threads dangling.

Detailed summaries and scans of this series can be found at O Ácido Cinza,

provided by one Rodrigo Shin. An overall summary of the convoluted plot and characters can be found here,

at the Mechanical Maniacs. A translation of the series by the Optical Internet Translation Gang is available here.