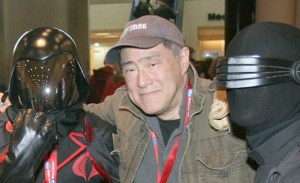 Larry Hama (born June 7, 1949) is an American Comic Book writer, artist, and editor. He originally studied art at Manhattan's High School of Art and Design, and sold his first comics work at the age of 16. After high school, Hama took a job drawing shoes for catalogs, then served in the Vietnam War with the United States Army Corps of Engineers, where he became a firearms and explosive ordnance expert. Afterward, he worked with Wally Wood, Neal Adams, and Alan Weiss as a penciler and inker, then later migrated to become an editor and writer for DC Comics and Marvel Comics.

He is best known for his work on G.I. Joe: A Real American Hero, where he holds the distinction of being the longest-serving writer of the series, along with creating the numerous character profiles for the Joe toys. In total, he wrote 153 issues with only a single fill-in by another writer. His other major claim to fame is Wolverine, which he wrote for eight years. Other works created by Larry Hama include Nth Man: The Ultimate Ninja and Bucky O'Hare and the Toad Wars.

Larry Hama is also an actor and musician; he has appeared in minor roles on television, and was a guitarist for the band K-Otics.

Tropes associated with Larry Hama include: