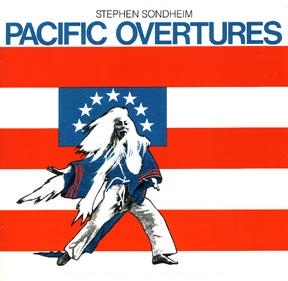 "The practical bird
having no tree of its own
borrows another's."
Advertisement:

Pacific Overtures is a musical with music and lyrics by Stephen Sondheim and book by John Weidman, with additional material from Hugh Wheeler. It tells the story of Japanese westernisation in the 19th century, focused partly through the lives of young samurai Kayama and fisherman Manjiro. The style of the show is a mix of Japanese theatrical traditions and Broadway conventions; the conceit of the show's style is that it might have been written by a Japanese who has been exposed to a lot of American musicals.

The play begins with the reciter commenting on Japan's peaceful and unchanging way of life. However, President Fillmore wishes to trade with the Japanese, and thus sends warships to the shores of Okinawa. The Americans arrive, give generous donations and leave. This paves the road to more and more trade with foreign powers, resulting in Japan becoming more and more western. Eventually, the Emperor Meiji decides to seize control and officially modernise Japan.

The show opened to mixed reviews and is very rarely performed (mostly due to its unconventional, experimental nature, and the requirement of a large cast of Asian men) but is considered one of Sondheim's most underrated works. Also, like so many of Sondheim's works, it was filmed for TV

(and broadcast to NHK, Japan's national TV channel) in 1976.