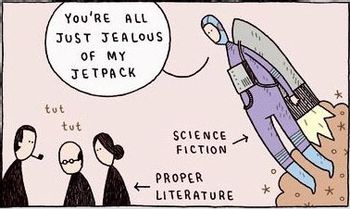 The Sci-Fi Ghetto reflects a long-lasting stigma which has been applied towards the science fiction genre, which frequently leads creators and marketers to shun "Sci-Fi", "Science Fiction" or "Fantasy" labels as much as possible, even on shows that have clear science fiction or fantastical elements. It also reflects the tendency for critics, academics and other creators to near-automatically dismiss or disdain works which cannot escape this label being applied, regardless of relative quality or merit. Conversely, if these critics, creators and academics do feel that the work possesses merit by their standards, expect them to strenuously insist that the work is not science fiction or fantasy (How could it be? It's good), regardless of how many torturous hoops they might have to jump through in order to do so.

A lot of this has to do with snobbery. A (somewhat contradictory) perception about science fiction in general is that it is somehow both too complex for mainstream audiences with "simple" tastes and yet simultaneously not literary and sophisticated enough for critics and academics.

This perception tends to be drawn from two extremes. In the first place, science fiction is often dismissed as lightweight, formulaic and poorly-written rubbish churned out by talentless hacks who never met a cliche they didn't enthusiastically regurgitate. On the other end of the spectrum, science fiction is often seen as aloof, dreary Doorstoppers, with impenetrable jargon, and use of a number of tropes that cater only to those who are familiar with the genre, rarely attracting casual readers. In either case, the result is considered the same; material which is poorly written with lame plots and characterization, almost entirely lacking in literary merit. This, of course, unfairly prejudges a massive and wide-spanning genre by its worst extremes, and ultimately takes a fairly narrow and limited view. While plenty of examples from the genre that reflect these criticisms do of course exist, to dismiss the entire genre based on them ignores the fact that Sturgeon's Law applies to science-fiction no less than any other genre. While it's true that even accepted classics of the genre can take time getting used to read, owing to its arcane content, the same is true for classical literature and poetry, which is impenetrable without some basic knowledge of Greek and Roman myth. Like any work that is ghettoized, its initial admirers form a subculture, who in many cases do in fact live up to the unfortunate stereotypes of science fiction fans as a bunch of weird dorky obsessives with no social skills. These fans, and especially fans who become writers, don't do favors when a work manages to successful by appealing to a broader audience, who can often be painted as Category Traitor.

Fantasy fiction suffers from this as well to a similar extent due to the difficulty of defining the line between science fiction and fantasy. In fact, fantasy fiction often has it even worse, as it is speculative in a completely implausible way (science fiction is just mostly implausible). This happens to horror as well, especially when it overlaps with Sci-Fi and Fantasy. It's been a little more accepted than those two genres, at least on the literary front (and, lately, television as well), but you'll rarely see awards given to horror works. With cinematic horror in particular, with the exception of Hays Code-era classics (like Universal's monster movies or the works of Alfred Hitchcock) and a selection of other indisputably great films (most of them dating to no later than the '70s), you'd be hard-pressed to find professional film critics who don't view horror as a land where gorn and exploitation stand in for plot and characters. Then there's the romance genre. In general, many critics view romance novels as nothing but the Extruded Book Product of companies like Harlequin and the worst depths of YA fiction, pandering to a Lowest Common Denominator of housewives and teenage girls who want to dream of an exciting new man. Romantic films get treated with a bit more respect, especially older ones (see: Casablanca, Annie Hall, much of Audrey Hepburn's filmography), but the very existence of the term Chick Flick shows that the stereotype exists there, too. In this case, it typically overlaps heavily with the Girl-Show Ghetto, the implication being that no self-respecting man would ever read a romance novel.

In the case of movies, the ghetto especially affects actors in genre movies. The perception in cinema is that science-fiction, horror, and fantasy, depend far more on special effects, costumes, writing, and direction than acting. Actors who appear in these works rarely get notice for their good performances, being rarely nominated, and almost never winning. Boris Karloff for instance was considered by his peers, by directors, and critics, as an excellent actor but since he often appeared in parts where he had to wear heavy makeup, and often played monsters, his work never really won the acknowledgement it deserved. The situation is inverted in recent years, especially in the superhero genre, where directors and producers cast critically-acclaimed actors who normally appear in independent and offbeat films to play major blockbuster roles, precisely to give them additional depth, but these are treated as "paycheck films" i.e. roles that give them financial security to later do films they really care about, and few consider their performances in these films as excellent in their own right. There's also the Comedy Ghetto which has the same issues but is something entirely separate, since even in the science fiction genre, a comic take on the genre rarely gets respect.

Keep in mind the ghetto may actually be American-centric. In Europe and Japan, talented authors in a variety of genres are critically respected and acclaimed. Most known is H. G. Wells and Jules Verne, who is to this day the second most translated author in the world behind Agatha Christie. Yet given how America dominates the global market in culture and influence, it's still widely known and enforced.

A Sub-Trope of Public Medium Ignorance. Can overlap with Animation Age Ghetto, as animated works have a strong tendency to be genre fiction. See also Not Wearing Tights, Not Using the "Z" Word, and Dead Horse Genre.

Not to be confused with Industrial Ghetto or Fantastic Ghetto.