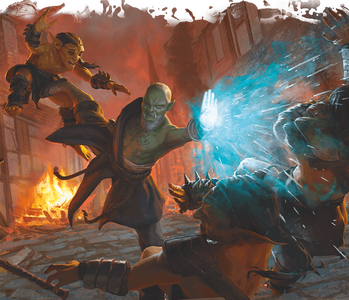 Huh, I must have been sick the day they covered that in karate class.
Advertisement:

One can achieve amazing things by properly training the body. But in fiction, it's possible to gain even greater ability through daily meditation and training the mind. The end result being, the characters condition themselves to exceed their human limitations until they unlock their true potential. As such, it's a staple of martial arts related media, Anime, and Fighting Games. It often overlaps with Martial Arts and Crafts and frequently includes the use of Dangerous Forbidden Techniques.

Distinct from Kung-Fu Wizard, wherein someone has martial arts and magic, but they're separate abilities. Contrast Mind over Matter, wherein someone can do amazing things with the brain, but not necessarily the body.

Dragons Up the Yin Yang are a common visual motif. Not to be confused with Full-Contact Magic, which is magic first, fighting second.

Compare Charles Atlas Superpower, where training, usually in the Far East, can make you better than any human in normal reality at plausibly mundane feats, and Ki Manipulation for less mundane ones. See also Fantastic Fighting Style.