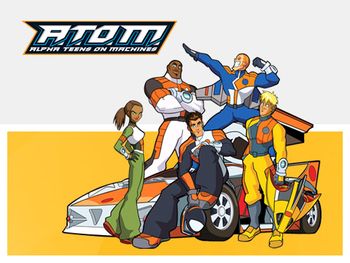 A.T.O.M. (Alpha Teens On Machines) is a French animated television series produced by SIP Animation based on a Hasbro action figure line, airing on Disney's Jetix action blocks/channels from 2005 to 2007. It chronicles the adventures of five teenagers (the eponymous Alpha Teens), set in the fictional Landmark City. The Alpha Teens test prototype vehicles and weapons for Lee Industries, and use these prototypes to combat criminals, particularly the sadistic Big Bad Alexander Paine.

A second season aired in Europe, but never made it to the US. This season contains an interesting Plot Twist: Mr. Lee, the industrialist who was the team's mentor in the first season, turns out to have been Evil All Along. Even worse, he's created the Mu-Team, a group of mutated Psycho Rangers with super powers, from the heroes' DNA through LEGO Genetics.