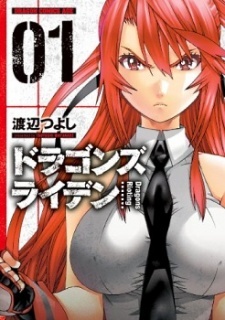 Be warned, she's as tough as she looks.
Advertisement:

A completed martial arts/comedy manga also known as Dragons Raiden by Watanabe Tsuyoshi, which ran from 2012 to 2017 in Monthly Dragon Age.

As a 6 Year Old, Rintaro is diagnosed with Henisei Tashu Ijou Syndrome (translated as Odd Behavior Towards Opposite Sex-Syndrome) also known as Hentai Syndrome, a disease that could kill him if he gets too sexually aroused. To save him and provide a way for him to live as normal a life as possible, his father teaches him in the mountains for ten years the martial art of Koei Sougetsu as a way to control his body and mind when confronted by females. When he's 16 he chooses to enroll Nangokuren High School, which he assumed to be the biggest all-boys school in the country, but is actually the biggest all-girls school that has just recently gone coed but is still now 99% female.

Rintaro now sees transferring out as his mission, but on his first day he stumbles upon a large scale battle and learns that the first rule of the school is that it "Abides the Law of Nature" which has turned the campus into a war zone-like environment between the strongest fighters. Forced by circumstances to demonstrate his skills, he's caught the eye of the 3 "Dragons", the bodacious female leaders of the three biggest factions that struggle against one another for control of the school. In particular, Ayane, the first year leader is determined to make him her 'master' after seeing him perform martial arts.