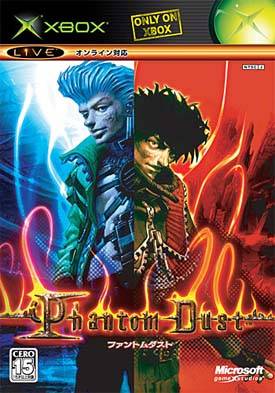 This game was forged in a fire fueled by philosophy books, illicit substances, the tears of frustrated players, and leftover Magic cards.
"Nobody remembers anything. Not when the world changed... nor why."
— Freia
Advertisement:

Phantom Dust is a 2005 Action RPG brought into the world by Microsoft Game Studios for the Xbox, directed by Panzer Dragoon series creator Yukio Futatsugi. The core gameplay consists of building "arsenals," each composed of thirty different skills of your choice. There are 320 such skills to choose from, plus the mandatory aura capsules you need to insert in your arsenal to use these skills. Like Magic: The Gathering, most skills require a specific amount of aura to use. Once the skill is used, your aura level goes down and starts to recharge. This is to prevent mad spamming of powerful skills. With the exception of the beginning of the game, you are randomly given four of these skills to each of your four main buttons (A, B, X, Y), plus three more random ones positioned near your spawn point that you can switch out with skills that you can't use at the moment or have been used up. Once you use one of the three, another random one will appear in its place until you've had access to all thirty of your skills/aura capsules.

The basics of combat are relatively simple, but it takes dozens of hours of gameplay practice to discover how each skill can be used and how each skill can best benefit your arsenal as a whole. At it's simplest, the fights consist of the you (and usually a teammate) locking on and fighting against one to two opponents in various arenas; all with their own arsenals. The skills themselves cover a wide range of abilities, from buffs, to various projectiles, to energy blades, to super-powered melee attacks, to erasing other players skills, to abilities that affect everyone's gameplay. Additionally, each skill has an optimal range to be used at.

Like the combat engine, the story of Phantom Dust seems simple but hides a lot of depth. The game starts off by explaining that everyone in the world, save one person, has lost their memories thanks to the eponymous substance. The phantom dust, poisonous particles that have the potential to erase peoples' memories and very identities, now covers the earth, forcing people to flee to underground cities to escape the dust and the monsters that came with it. Thankfully, the dust isn't all bad. Certain people, when exposed to it, can transform their will into energy. These people, called Espers, search the surface world for clues to what happened to humanity and to find a way for humans to resettle the surface so the human race won't go extinct from something as pathetic as rickets. In the opening cutscene, several Espers fight their way to two cryogenic capsules on ledges hanging over a gigantic crater. Inside these capsules the protagonist and an apparent acquaintance of his, named Edgar, sleep. Once they are brought down to this group of Espers' underground base, it is discovered that they are exceptionally gifted at controlling the dust (who saw that coming?!) and they are initiated in to the Espers' organization. The rest of the story is told via missions various characters give the protagonist and through certain memory boxes containing background information, which are obtained by beating missions.

Although it was a budget game, the unique gameplay of Phantom Dust earned it a cult following thanks to multiplayer via Xbox Live, which sadly ended coverage for all original Xbox games in April, 2010.

At E3 2014, it was suddenly announced that the game would be given a multiplayer-only Continuity Reboot for the Xbox One by Darkside Game Studios, but was cancelled in 2015 due to budget constraints, which also resulted in Darkside closing down. Microsoft still planned to release the game, but after years of Development Hell, it was revealed at E3 2016 that a port of the game was in the works, and was released in May 2017 for Xbox One and Windows 10 as a free-to-play title, with Xbox Play Anywhere support.