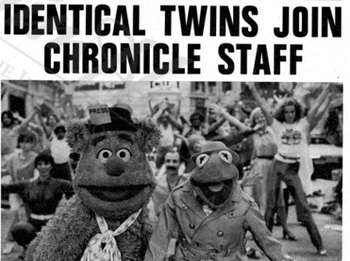 I'm pretty sure they are both bears.
Kermit: Gee, Mr. Tarkanian, we thought identical twins working on a newspaper would make an interesting story.
Mr. Tarkanian: It doesn't. Especially since you two guys don't look anything alike!
Kermit: That's because Fozzie's not wearing his hat. Fozzie, put your hat back on.
Fozzie: Yes, sir! [puts his hat on]
Kermit: See?
Mr. Tarkanian: Oh, yeah...I see it now.
—The Great Muppet Caper
Advertisement:

Characters who have an enigmatic connection of some kind will often be similar in other ways. Usually this means they have similar movesets, or something, but sometimes that's impractical or the writers decide they need something that people can notice without seeming goofy.

That's when the goofiest similarity of all crops up, the Alleged Lookalike. This is when the cast has difficulty telling two characters apart, or otherwise notes physical similarities between them - but to the audience, they don't look any more alike than any other pair of characters. This can be a side-effect of Only Six Faces, or Generic Cuteness. It can also be a result of character design (having two characters who genuinely look identical can be confusing for the audience, unless them being identical is the point). Due to the Rule of Perception, most creators try to add something to make it always evident which is which. In a live-action series, oftentimes the creators don't want to put in the work to either cast twins or deal with the complexity of Acting for Two.

This only covers cases where two characters are compared in a way that to the audience is clearly not appropriate; just saying You Remind Me of X doesn't count. See also Easy Impersonation, when it's someone deliberately disguised as another.

Kermit the Frog and Fozzie the Bear, are supposed to be identical twins, despite being...well, a frog and a bear. As soon as they put on their hats, everyone falls for it.

Kermit the Frog and Fozzie the Bear, are supposed to be identical twins, despite being...well, a frog and a bear. As soon as they put on their hats, everyone falls for it.